What to know about autoflowering cannabis seeds?

Are you new to autoflowering cannabis seeds? Here is some characteristics and advatages of those cannabis strains.

What to know about autoflowering cannabis seeds? Autoflowering cannabis seeds germinate into plants that start flowering on their own after approx 2-4 weeks of growth. But it depends mainly on strains specifics. Some automatic strains may start to bloom even after two months.

Non-photoperiodic varieties: what does this actually mean? 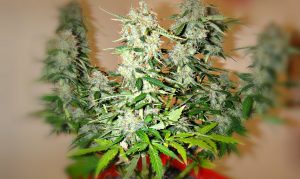 Photoperiodic cannabis plants grow according to how many hours of light they receive. In nature, these plants start to flower when the days start to get shorter at the end of summer. Indoors, growers must initiate flowering by changing the light cycle to 12 hours of light and 12 hours of darkness.

Autoflowering strains first appeared on the market at the turn of the millennium and were not very popular. They were not strong varieties, they had a weak aroma and also low yields, because the original ruderalis was weaker.

But they have come a long way since then. Modern autoflowering varieties can compete with (and in some cases surpass) photoperiodic varieties in terms of vigour, yield and flavour. However, they still retain the unique characteristics we have already mentioned.

So don’t hesitate to give this luxury cannabis model a chance.