Another satisfied customer shared his impressions of growing Paradox cannabis seeds. How did he get on and what would he like to tell you? Check it out.

We have another report on our cannabis varieties. This time it will be on the Paradox variety and the author of this report is user TronnK. It is clear from his report that he was happy with this strain as a user, and that is exactly the Mojo of our seedbank. Judge for yourself. 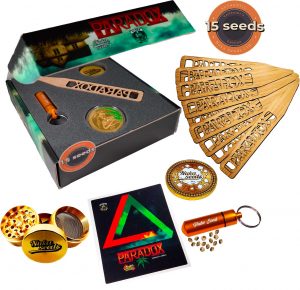 “Greetings guys and girls from Nukaseeds. I’m not very eloquent and I’m not very good at story-telling, so I’ll just throw it on the paper in a short way.

Seeds and packets – Really? Like, I was expecting quite a lot from the pictures, but not this. I got a really load of stuff for a good price, kind of like eating at a breakfast table to bursting. Anyway, I was very pleasantly surprised by my 10-pack. So I won’t use the stamps much, at most for some photos, but I was most pleased with the coin, it’s really pretty and the bomb is a great accessory for my keys. I’ll probably put the sticker on my diary.

Germination – I used the usual method, sprouting cannabis seeds on a paper napkin. I think it’s the best method, quick, effective and almost 100%. Anyone who says otherwise is a rubber and can’t do it :D. Like the rockwool, I don’t like that at all.

Soil – I use my own super soil with compost tea. It contains plenty of nutrition and no need to over fertilize with some artificial crap unnecessarily. I always put some perlite and coir in there to give it great aeration.

Growing process – Well, I’d better cut it a bit short. After a few days of germination, I had beautiful little seedlings that ended up in the pot right away. I did a lot of pruning and played around with mainlining a bit, I like a mossy tree. In the end the mainlining didn’t go so well, but that’s okay. However, the growing itself was only spoiled a little by the rains and I had a little problem with mildew, but luckily the pruning saved the day, albeit at the cost of the crop.

Moving into flowering, I only made a few adjustments so that the most juice went into the flowers. After a couple of weeks it was looking beautiful. There were cones everywhere and enough scents to put one to sleep. Like I had a lot of work to do to harvest it some time later. There was a lot of it.

I was very pleased with Nukaseeds Seedbank, they are innovative and not afraid to do it. I’m curious to see what they come up with next, I’m sure we have a lot to look forward to.

Grow with a smile, TronnK.”

By all accounts a success, don’t you think? And if you don’t believe, test Paradox for yourself and you’ll see that this satisfied customer didn’t mince words.