Cannabis and nausea – how can marijuana help?

Cannabis as a treatment for nausea can improve the quality of life of people undergoing chemotherapy and pregnant mothers.

Cannabis and its medical properties have been around since time immemorial. For thousands of years, it has been used as an aid against pain and inflammatory diseases. The evidence that it works against nausea and vomiting is backed up by really long studies and several theories. But how does the research to date look at it and what has it brought us so far?

How does cannabis help when we are sick? THC and CBD interact with the endocannabinoid system (ECS). The ECS consists of many receptors that are distributed throughout the body, which control specific chemical and biological processes in the body.

Cannabis against nausea caused by chemotherapy Cannabis is preferentially used to alleviate the side effects associated with chemotherapy. These are mainly joint pain, vomiting and nausea.

An American study confirms these findings. One of the authors of the paper, Ian Kleckner, commented in the final analysis:

“We have evidence that cannabis and cannabis products in general can relieve the side effects of chemotherapy. Historically, drugs have mainly been administered by the oral method, but the method of inhaling the active ingredient would be much more gentle, especially for patients who are unwell. Unfortunately, we have research models that are 30 years old, so all that is left is to apply the cannabis use model.”

In the paper, Kleckner and his colleagues further explored the issue of vomiting and nausea itself. These are two distinct mechanisms, each of which manifests and reduces differently. In modern terms, vomiting can be said to be much more easily suppressed than nausea itself.

Interestingly, no one has yet conducted a study comparing cannabis treatment and treatment by conventional means.

It is good that not only in the USA, but also in Europe and Asia, doctors are making it clear to their patients that there is an alternative way, namely treatment with cannabis products. 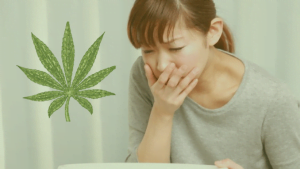 We are thinking specifically of the morning sickness that mothers-to-be suffer from. However, it does not have to be in the morning, but it can happen to a pregnant woman at any time of the day. It can also last all day, but we don’t want to scare anyone.

In most cases, morning sickness occurs in the first trimester. However, it happens that future moms experience this unwanted event throughout the entire pregnancy. In extreme cases, there may be such cases when the health of both mom and baby is threatened. This condition is called Hypremesis Gravidarum.

Due to the availability of cannabis products, the number of women consuming cannabis during pregnancy is increasing. This is suggested by a large-scale analysis that focused on pregnant women between 2009 and 2016. Thanks to this data, the Audit Office confirmed that the number of mothers using cannabis has increased rapidly.

Clinically confirmed evidence does not yet exist. But there is a lot of evidence that is more than positive. The mothers during this period did not have a complicated or premature birth, there were no miscarriages or complications in pregnancy. The babies were healthy and showed no signs of mental or physical problems. It should be added that these mothers themselves admitted that cannabis products helped them.

There are, however, those on the other side who do not recommend the use of cannabis for pregnant women, as it is still a “drug” and they do not know what it will do to the mother and her baby. Ian Kleckner finally commented on this whole study as follows:

“Not that I’m a regular cannabis user, but like many of us I have tasted the substance. It has always had a specific purpose. I can say that I have never felt sick, on the contrary I have always felt relieved and not so pressured”.

Whether it is to suppress nausea or the feeling of vomiting , the fact remains that cannabis is not so risky as other legal drugs.

If you have a problem with nausea you can purchase cannabis seeds and grow your own medicament.